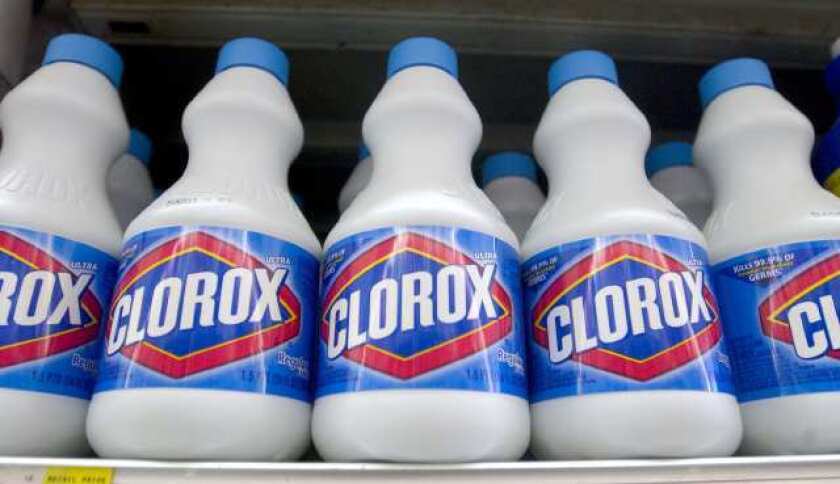 Column: Why did Trump push disinfectant as a cure for the coronavirus? He listens to quacks

It was one of those jaw-dropping moments we’ve come to expect from the president: “I see the disinfectant that knocks it out in a minute, one minute,” Trump said last week during his daily news briefing.

Looking in the direction of the experts sitting against the wall to his right, he asked: “And is there a way we can do something like that by injection inside, or almost a cleaning? Because you see it gets inside the lungs and it does a tremendous number on the lungs, so it would be interesting to check that.”

The uncomfortable stare of Deborah Birx, the physician who serves as the response coordinator for his coronavirus task force, said it all.

The president seemed to be suggesting that doctors inject patients with household disinfectants such as bleach, which kills the virus on hard surfaces. Calls to poison control centers spiked. The manufacturers of Clorox and Lysol pleaded with the public not to ingest their products.

President Trump soon claimed he was being “sarcastic,” trying to bait reporters, because, of course, when more than 50,000 of your fellow Americans have died from a little understood new virus, and millions more are unemployed, the moment screams out for sarcasm and hostility.

Trump famously does not rely on science, nor on experts. He goes with his feelings, his gut, his “you know what,” as he said last week, pointing to his hyper-coiffed head. Since he took office, we have seen that he does not read, does not study and tends to parrot what he hears on Fox News.

It is not clear how the topic of ingesting disinfectants came to Trump’s attention, but there is a thriving industry of snake oil salesmen who have pushed the practice for years. They market chlorine dioxide, an industrial form of bleach, as a miracle cure for ailments such as brain cancer and HIV/AIDS. More recently, they have moved into the autism market, where parents desperate to “cure” the condition are advised to put dangerous concentrations of bleach in their children’s drinking water and give them bleach enemas.

One of these purveyors, the self-styled archbishop of the Genesis II Church of Health and Healing, Mark Grenon, said he reached out to Trump recently for help after a federal court barred him from selling Miracle Mineral Solution, or MMS. Grenon calls MMS a “sacrament,” and according to his claims, it can cure damn near everything but gullibility: cancer, multiple sclerosis, malaria, HIV/AIDS, Alzheimer’s, autism. And now, of course, he’s touting its virtues as a COVID-19 treatment.

Earlier this month, a Florida judge issued a temporary restraining order that bars Genesis from marketing MMS, which government lawyers asserted is nothing more than “a powerful bleach product.” The order, which stemmed from a Justice Department complaint, came months after a Food and Drug Administration warning that ingesting what amounts to industrial bleach can cause nausea, vomiting, diarrhea and severe dehydration that can lead to death.

According to the Guardian, Grenon claimed to have sent Trump a letter touting MMS as “a wonderful detox that can kill 99% of the pathogens in the body,” and “can rid the body of COVID-19.” On his radio show, Grenon read the letter he said he had written to Trump, the Guardian reported. “Dear Mr. President,” it began, “I am praying you read this letter and intervene.” The White House did not respond to a Guardian inquiry about whether Trump had seen the letter.

While it was shocking to many that the president would blithely recommend such a dangerous idea, one group was entirely unsurprised: mothers of autistic children who have joined forces to fight the plague of medical misinformation that endangers their kids.

For years, quacks have been promoting the idea that ingesting bleach, either orally or by enema, can “cure” autism, a neurological condition for which there is no cure.

About five years ago, Melissa Eaton, 40, a mom in Salisbury, N.C., whose 10-year-old son has autism, banded together with other mothers of autistic children to infiltrate pseudoscience groups on social media that were promoting questionable autism treatments, including chlorine dioxide, the industrial bleach sold by Genesis and others. In 2013, she said, a disciple of Grenon’s, Kerri Rivera, began promoting the bleach as a cure for autism. Rivera moved to Mexico after Illinois shut down her business. She is now believed to be living in Germany with the father of an autistic child who sought her services in Mexico.

“When I saw the abuse and harm, it wasn’t something I could let go of,” Eaton told me, adding that she sees her son as someone whose brain works differently, not someone who needs curing. “I saw photos of children’s bloody intestinal lining on their diapers. They had given their children this product and this is what came out. And the fact was they thought it was a parasite and autism was leaving.”

For years, she and her colleagues have reported the bleach promoters to regulators, with mixed results. They were thrilled with the Florida decision. And they have had a few victories of their own, persuading Amazon and EBay to stop selling Rivera’s products. YouTube banned videos promoting MMS after an investigation by Business Insider.

Now, COVID-19 has put an even brighter spotlight on these unethical operators.“It has taken a pandemic to expose this movement and the ways that pseudoscience scammers use social media and fear to sell their products,” wrote Eaton and three coauthors in the New York Times on Sunday.

“We’ve gotten a close look at the psychology that draws people toward such products — and in our view, it is akin to the psychology that drives some of the Trumpist worldview,” wrote Eaton with Anne Borden King of the Campaign Against Phony Autism Cures, Emma Dalmayne of Autistic Inclusive Meets, and Amanda Seigler of Fierce Autistics and Allies. “It is a siege mentality, rooted in the ideology of the anti-vaccine movement, based on anecdotes, conspiracy theories and a fear-mongering distrust of so-called Big Government.”

On Saturday, stung by the blowback to his inane suggestion about disinfectant, Trump intimated that he would end his marathon coronavirus task force briefings. “Not worth the time & effort,” he tweeted.

Nor, I would add, is it worth the danger he poses to the health and well-being of people all over the world.