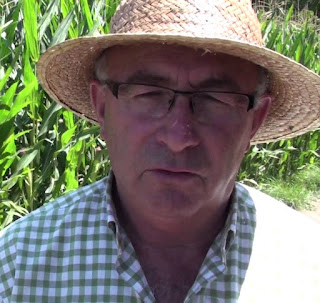 *Personal note: I heard of him when I reported a child being abused with bleach who was in Madrid, Spain*

Josep Pàmies is a farmer from Catalonia. He was born in 1948. He currently lives in Balaguer, La Noguera. He comes from a family of peasant farmers. The land is on the banks of the Segre River. This land was in his family for four generations.

He owns a company called Pamies Horticoles that is dedicated to the commercialization of organic vegetables, greens and herbs. His goal was to promote self sufficiency. He portrays the image that he is a humble organic farmer that fights big Pharma. He claims to be a victim of large companies that are conspiring against him. He has his trademark look, always wearing his straw hat.

They offer in person and online consultations about treating conditions with plants and to eliminate drugs. This company is ran by him and his family.

He has committed violent acts against GMO crops. Most farmers in his area opted for GMO corn and this angered him.

During a visit by foreign journalists to a GMO corn field, Josep Pàmies appeared with a few acolytes to blow it up. He said that he had an ecological corn field that was more productive but he could not sho wit because he mowed a week prior. After this, he read a manifesto and the journalists did not understand it because it needed to be translated. The visit ended and this experience made the journalists fearful of people in Spain.

Shift from GMO to Quackery

After Josep Pàmies was unsuccessful in fighting GMO, he decided to switch his market to medicinal plants and no longer presents himself as a victim of Monsanto but instead is the victim of the whole pharmeceutical industry.

This was only the start of it. He jumped from food to food, following the pattern set by the market, to health and where he claimed he cured cancer with his plants.

“We promote people’s self sufficiency. We believe that everyone can grow medicinal plants they need and must learn to be the guardian of thier own health.” It sounded reasonable until he is encouraging people to not seek guidance from qualified medical professionals.

“People must be disobedient to imposition of drugs.”

Josep Pàmies denies the existence of hepatitis C and AIDS and accused the World Health Organization of genocide. He denounces the pharmaceutical industry for creating patients instead of curing disease. He states that Ebola is curable with MMS and native plants and that medicinal plants put chemotherapy into question.

Whenever he is in legal trouble, he states a conspiracy is after him. What people normally do is demonstrate through studies, research and solid data that their product works and has therapeutic properties. He was quick to go public and say that he was a target. This is common practice among quacks.

Josep Pàmies is spreading the word of Chlorine Dioxide all over Spain. He made it so Chlorine Dioxide, or MMS was exempt from laws, very similarly how the Grenons did it in the United States. This with a cooperative effort between Andreas Kalkcler.

Complaint Filed with the Ministry of Health

On November 24, 2018, a complaint was filed against Andreas Kalcker and Josep Pamies. This complaint was investigated by the Prosecutors office. They claim that MMS cures AIDS, malaria, multiple sclerosis, cancer, autism, hepatitis, diabetes and arthritis.
The Central Computer Crime Unit of the Attorney General’s Office sent a copy to the Provincial Prosecutor’s office of Castellion, Madrid, Lleida and Santa Cruz de Tenerife to open a case and continue to collect evidence and open a follow up file.
MMS was taken off the market in 2010 due to a public health concern by the Spanish Medicines Agency.
The Central Computer Crime Unit opened a proceeding to determine where the advertising, sale and distribution  had originated from.
Days before the complaint was filed, the Committee for the Promotion and Support of Autistic Women (CEPMA) delivered a petition with 136,000 signatures to Health to make make it known that “bleach does not cure autism” and demands a commitment against the spread of quackery that put the public health at risk.

College of Physicians of Barcelona Investigates

The Barcelona College of Physicians have been condemning the bad practice of the farmer and his associates for years because he threatens public health. They had discovered that some of his associates could be with the college. When asked about this, the college’s secretary Gustavo Tolchinsky said that they were “studying various professionals” for their possible relationship for this scam.
The College is worried that doctors could be recommending or adminstering CD against different ailments. This is not approved in Spain. The college is not releasing any names since they are in the middle of the investigation. They said it is in the “internal records of the College.” When they have enough information collected, they will take appropriate action.

Pamies went from saying that COVID is not a threat and it was not necessary to take any precautions to recommending chlorine dioxide for COVID 19. He constantly contradicts himself but his followers don’t seem to care. They recommend MMS even though it is banned by the Spanish Agency for Medicines and Health Products since 2010. They still get followers to consume MMS according to the protocols that Pamies followers created themselves. This is not endorsed by any clinical trial.
Pamies’ followers are always showing “the feeling that the authorities are deceiving you.”

There were people showing up to health clinics who were pressuring doctors to use chlorine dioxide to sick patients.

There was a statement made to the Prosecutor’s Office warning of this dire situation. “We filed the complaint because it was an attack on the public health order.” This initiative was unsuccessful. “We understand that for reason that escape arguments that we were giving, as a guarantor of good medical practices.”