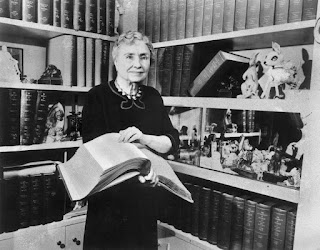 Helen Keller was born on June 27, 1880 in Tuscubia, Alabama. She became DeafBlind after a fever caused by meningitis at 19 months old. Her teacher, Anne Sullivan taught her how to communicate with ASL, lipreading and Braille.

This is not to say that she wasn’t able to do anything before being taught by Ms. Sullivan. She used 60 different signs to make herself understood. She mostly used those to communicate with her friend Martha Washington, who was the daughter of the family cook. “We spent a great deal of time in the kitchen, kneading dough balls, helping make ice cream, grinding coffee, quarreling over the cake bowl and feeding the hens and the turkeys thats warned the kitchen steps,” Keller wrote in her autobiography, The Story of My life. It is true the family didn’t think she could be educated but she still was able to communicate.

“Since society only portrays Helen Keller as a little girl, a lot of people subconsciously learn to infantilize disabled adults. And I’ve been treated like a child. Many disabled adults have been treated like children,” Haban Girma, a Deaf Blind disability activist states. “That makes it difficult to get a job, be treated with respect, to get good quality education and healthcare as an adult.”

Keller entered Radcliffe College in 1900. Anne Sullivan attended with her and would finger spell the lectures into her hand during class. After class, Helen would write what she remembered from the lecture using a typewriter. When taking tests, Keller was assigned objective proctors to assist her if she needed it. While she was attending, people doubted whether or not she would complete her education. Keller was the first DeafBlind graduate of Radcliffe College, now Harvard University in 1904.
Keller also worked for the American Foundation for the Blind from the mid 1920’s until she died in 1968. She spent her time there advocating for schools for the bind and Braille reading materials.
She read Braille translated books by Karl Marx, HG Wells and William Morris.

Keller was an early supporter or NAACP and condemned lynching. She also cofounded the American Civil Liberties Union in 1920.
She raised awareness of civil rights of disabled Black people, created ties with the NAACO and used her notoriety to raise awareness of apartheid in South Africa. She never did publicly criticize the system in South Africa.
“Nay, let me say it, this great republic of ours is a mockery when citizens are denied rights which the Constitution guarantees them when they are openly evicted, terrorized and lynched by prejudiced mobs, and thier persecutors and murders are allowed to walk abroad unpunished,” Keller wrote to the NAACP endorsing their work and decrying the social climate of the Untied States on February 13, 1916.
“The continued lynchings and other crimes against negros, whether in New England or the South, and unspeakable political exponents of white supremacy, according to all recorded history, agar ill for America’s Future,” Keller said in a letter to Nella Braddy, September 22, 1946.

Keller noticed the relationship between disability and poverty and blamed capitalism and poor industrial conditions for both. Because of the injuries in factories, Keller told the New York Tribune in 1916 that blindness was “often caused by the selfishness and greed of employers.”
In a letter to the Industrial Works of the World founder Eugene Debs, she said “Yours for the revolution! May it come swiftly like a shaft surrounding the dark!”
She had no patience for compromise, argued that charitable aid did more to quash the guilt of the rich than to improve conditions for vulnerable people. Instead she called for the dismantling for an economic order where “the working class lives in want while to master class lives in luxury.”
“If the families of the workers are left to the uncontrolled caprice of nature, we shall have a larger percentage of children that are forced to toil in the mills and factories – who are denied their birthright of education and play.”
She was interested in multiple social justice causes. She was a pacifist, suffragist, birth control advocate, a supporter of the NAACP and co founder of the ACLU as a way to protect striking workers from jail and deportation.

Keller joined the socialist party in 1909 and corresponded often with Eugene Debs, the party’s most prominent member. He was a 5 time presidential candidate.
Shortly after joining the Socialist party, she joined the Industrial Workers of the World. She supported strikes, walking picket lines, giving lecture tours and writing articles for publication like The Liberator.
She was even on FBI’s watch list for ties to the communist party. There was a report on her for possible relations to the communist party on July 1, 1953.

“No one has ever given me a good reason why we should obey unjust laws,” Keller wrote in 1914. This was the same year Margaret Sanger flouted the obscenity laws by publishing articles about birth control and abortion in the Women Rebel.
One year later, Keller publicly endorsed Sanger’s birth control movement. She outlined her socioeconomic and eugenic rationals for supporting it.
She supported birth control for all the wrong reasons.
The two did not meet until 1944. This is amazing since they ran in the same circles before World War I. They even worked on the same block. They both joined the Socialist Party and the IWW within one year of each other.

Keller’s writings can be cited to show her support for eugenics and her friendship of Alexander Graham Bell. In her autobiography,”TO Alexander Graham Bell who has taught the Deaf to speak and enabled the listening ear to hear speech from the Atlantic to the Rockies, I dedicate this Story of My life.”
“His dominating passion is his love for children. He is near quite so happy as when he has a little Deaf child in his arms. HIs labors behalf of the Deaf will live and bless generations of children to come.”
According to her autobiography,”Everything has its wonders, even darkness and silence, and I learn, whatever state I may be in, therein to be content. . . A mental defective, on the other hand, is almost sure to be a potential criminal.”
On December 18, 1915, she wrote a public letter published in The New Republic, in response to a doctor recent dappling in infanticide. “Much of the discussion aroused by Dr. Haiselden when he permitted the Bollinger baby to die centers around a belief in the sacredness of life. If many of those that object to the physician’s course would take the trouble to analyze thier idea of ‘life,’ I think they would find that it means just to breathe. Surely they must admit that such existence is not worthwhile. It is the possibilities of happiness, intelligence and power that gives life its sanctity and they are absent in the case of poor, misshapen, paralyzed, unthinking creature.”
Letter in full:

Much of the discussion aroused by Dr. Haiselden when he permitted the Bollinger baby to die centers around a belief in the sacredness of life.  If many of those that object to the physicians course would take the trouble to analyze their idea of “life,” I think they would find that it means just to breathe.  Surely they must admit that such an existence is not worth while.  It is the possibilities of happiness, intelligence and power that give life its sanctity, and they are absent in the case of a poor, misshapen, paralyzed, unthinking creature.  I think there are many more clear cases of such hopeless death-in-life than the critics of Dr. Haiselden realize.  The toleration of such anomalies tends to lessen the sacredness in which normal life is held.

There is one objection, however, to this weeding of the human garden that shows a sincere love of true life.  It is the fear that we cannot trust any mortal with so responsible and delicate a task.  Yet have not mortals for long ages been entrusted with the decision of questions just as momentous and far-reaching; with kingship, with the education of the race, with feeding, clothing, sheltering and employing their fellowmen?  In the jury of the criminal court we have an institution that is called upon to make just such decisions as Dr. Haiselden made, to decide whether a man is fit to associated with his fellows, whether he is fit to live.

It seems to me that the simplest, wisest thing to do would be to submit cases like that of the malformed idiot baby to a jury of expert physicians.  An ordinary jury decides matters of life and death on the evidence of untrained and often prejudiced observers.  Their own verdict is not based on a knowledge of criminology, and they are often swayed by obscure prejudices or the eloquence of a prosecutor.  Even if the accused before them is guilty, there is often no way of knowing that he would commit new crimes, that he would not become a useful and productive member of society.  A mental defective, on the other hand, is almost sure to be a potential criminal.  The evidence before a jury of physicians considering the case of an idiot would be exact and scientific.  Their findings would be free from the prejudice and inaccuracy of untrained observation.  They would act only in cases of true idiocy, where there could be no hope of mental development.

It is true, the physicians’ court might be liable to abuse like other courts.  The powerful of the earth might use it to decide cases to suit themselves.  But if the evidence were presented openly and the decisions made public before the death of the child, there would be little danger of mistakes or abuses.  Anyone interested in the case who did not believe the child ought to die might be permitted to provide for its care and maintenance.  It would be humanly impossible to give absolute guarantees for every baby worth saving, but a similar condition prevails throughout our lives.  Conservatives ask too much perfection of these new methods and institutions, although they know how far the old ones have fallen short of what they were expected to accomplish. We can only wait and hope for better results as the average of human intelligence, trustworthiness and justice arises.  Meanwhile we must decide between a fine humanity like Dr. Haiselden’s and a cowardly sentimentalism.