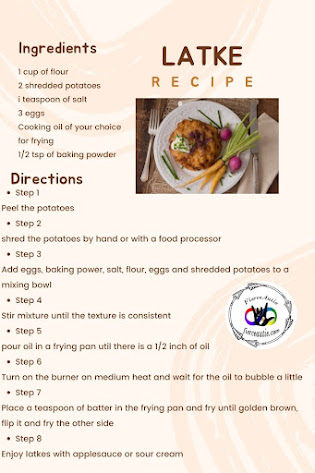 Hanukkah is known as the Festival of Lights. Most Goyim (non Jews) know it as a Jewish holiday around the time of Christmas that involves giving gifts. From this they draw the conclusion that it is the Jewish Christmas and that simply is not the case. It is a minor holiday on the Jewish calendar and isn’t even in the Torah. This is because it happened after the Torah was written.

What is Hannukah and When Does it Take Place?

Hanukkah is an 8 day wintertime holiday that is celebrated by lighting the menorah, blessings and fried foods. The word “Chanukah” means dedication in Hebrew. It got this name because it celebrates the rededication of the Second Holy Temple in Jerusalem. It has many English spelling variations because it is a Hebrew word and not meant to be spelled in English.

As many Jewish holidays, Hannukah follows the Jewish Calander and starts at sundown on the 25th o Kislev and continues for 8 days. On the English Calander, it usually takes place during December but not all the time. There are years that it is in November, around the time of Thanksgiving.

In around 200 BCE (before the common era), Judea (present day Israel) was ruled by Antiochus III, the Seleucid king (Syrian-Greeks). He allowed the Jews to practice thier faith. His son Antichus IV Epiphanes was not as accepting. He tried to force the Jews to accept Greek culture and beliefs instead of the Jewish culture and faith. He outlawed the Jewish religion and ordered the Jews to worship Greek G-ds in 168 BCE. His soildors came into Jerusalem and massacred thousands of people and destroyed the Temple. They erected an altar to Zeus and sacrificing pigs within the Temple walls.
An unlikely victory happened. A small band of faithful and poor armed Jews, led by Mattathias and his 5 sons, defeated one of the strongest armies on earth in a large scale rebellion. Matthathias died in 166 BCE, his son Judah, also known as Judah the Macabee (The hammer), took over the rebellion. In the span of two years, they drove the Greeks from the land and reclaimed the Holy Temple in Jerusalem and rededicated it to the service of G-d. They did this by relying on guerrilla warfare tactics. Judah called on his followers to cleanse the temple. They rebuilt the altar went to light the menorah.
When the Jews went to find the Menorah (traditional menorah has 7 candles, not 9. Hannukiah has the 9 and its for Hanukkah), they only found a single cruse of olive oil that had not been contaminated by the Greeks.
A second miracle happened. They lit the menorah and the oil lasted for 8 days instead of the one day it should have.

How Hanukkah is Celebrated

The main part of the celebration is the lighting of the menorah each night. The menorah holds 9 candles. Eight of them are for each of the days of the holiday. One of the candles is taller than the others. This is called the Shemash, or helper candle. This candle is used to light the other candles from right to left, the same way Hebrew is read.
On the first night only one candle is lit by the shamash and each day the number of candles increases by one. So on the first day, one candle is let. On the second day, two candles are let. When the 8th day comes, all the candles are lit.
On Friday night during Hanukkah, the menorah must be lit before the shabbat candles. There are special blessings on the Shabbat lighting of the menorah.
A menorah is lit in every household and placed in the window or doorway. The menorah is also lit in the Temple and other public places. In modern days, an electric menorah is used to be put in windows to prevent fires.

Because one of the Chanukkah miracles involved oil, it is traditional to eat foods fried in oil. One of the foods is a latke, which is a potato pancake fried in oil. It is normally garnished with applesauce or sour cream.
My Latke Recipe (text of recipe is in alt text)
In Israel, Sufganya, or Jelly donuts, is the classic food for Hanukkah.

Dreidle is a 4 sided top that is used to play a traditional game for Hannukah. The letters are Nun, Gimmel, Hey and Shin. It is an acronu for Nes Gadol Haya Sham. It translates to “a great miracle happened there.” In Israel the dreidels are a bit different. It says Nes Gadol Haya Po. “A great miracle happened here.”
The game is usually played for a pot of coins, nuts, candy, etc. In our family it’s always gelt.
How to play
1. Any number of players can play
2. Each player starts with an equal number of gelt or any other game pieces
3. At the beginning of each round, every player puts one game piece in the center pot. Every time the pot is emptied  or has only one piece left, every player puts one in.
4. When its your turn, spin the dreidel once. Each letter symbolizes what to do in the game.
Nun: “nisht” or nothing. The player does nothing
Gimel: “gantz” or everything. The player gets everything in the pot.
Hey: “halb” or half. The player get half the pot. If there is an odd number of pieces, the player takes                half plus one.
Shin (outside of Israel) or Po: “shtel” or put in. Po also means put in. The player adds a game piece to the pot.
5. If a player has no game pieces left, they may borrow from another player.
6. The game is over when everything has been won.

In the rise of commercialism, people place great importance in giving gifts for Hannukah. We do not do this in my family. We have small gifts like sensory toys, gelt, socks, etc. Traditionally gelt or gifts of money is what is given to children. The cash gifts give the children an opportunity to give tzedakah (charity).
The practice of giving gifts was popularized due to the holiday’s close proximity to Christmas. Capitalism treats it as the “Jewish Christmas” and it needs to stop. For my family, we are thankful that this holiday is not complicated but commercialism is catching up with us.
When in stores we see gnomes (I love gnomes but it has nothing to do with the holiday), things that say “Oy to the world”, elves with Magen David (Jewish Stars). It is slowly becoming like Christmas when Hanukkah is not even a major holiday.
Hanukkah isn’t Christmas and it should not be treated as such. If it is treated as Christmas then they will succeed at Christianizing us. Decorations are one thing but don’t bring Christmas into it.
Let’s keep Hanukah simple and let’s keep it Jewish.