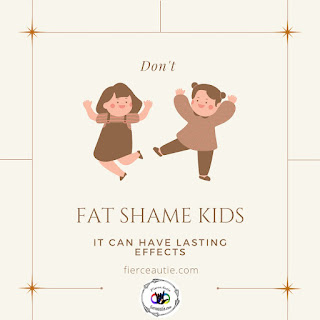 Fat shaming kids can lead to lasting trauma into adult hood. In the autistic community, there are several co morbidities that cause weight gain and it is a symptom of a disorder.  I was fat shamed by my mother, father and grand parents growing up. My brother, who I found now is extremely toxic, joined in because the elders of the family were doing it. It still haunts me to this day.

How I Was Fat Shamed

Before I gained the weight from PCOS, my brothers and I were brought to the pediatrician for our yearly checkup. I think I was about 7 years old. My youngest brother would have been 5. Our bloodwork came back with slightly elevated cholesterol. I don’t know what type. Since my brother was thin, she didn’t fuss with him too much. I was the average size of a child that age
I was controlled with food. Everything that went into my mouth had to be logged. My brother and I had the same issue but because I was bigger, I was the one being monitored. I remember my mother saying “no one likes a fat girl.” She also said,”I can’t be seen with an overweight daughter.” I wasn’t even overweight at that point.
This was at the same time my other brother was on a diet to gain weight and she made sure he ate all the tasty food in front of me. She even forced me to drink skim milk and I could not handle the texture of it. I didn’t realize thats what it was at the time but I recognize it now.
When I was about 10, I started to gain some weight. This is around the time I started to go into puberty. I was also in Karate, soccer, baseball, etc. Its not like I was just sitting around. I was always doing something and exercising.
Around that time, my grandmother came to visit from Brooklyn. We lived on Long Island so it was just a train ride away. She had my brothers and I line up in front of the garage for a photo. Then my grandmother said the one thing I will never forget. “Do you only have enough food to feed one child?” I did not understand it at the time but as I processed this statement, it dug deep like a knife. This was only the beginning.
My mother put me on a strict diet. She allowed my brothers to eat in front of me. She really controlled me with food. Instead of teaching me how to eat properly, she did this.
When I was 13, my mother took me to weight watchers. I was only in a size 12. I wasn’t really that much overweight but because my brothers were thin, I was huge according to her standards. Its hypocritical because she wasn’t that small either.
At Weight Watchers, I had weekly weigh ins and my mother made me participate in the meetings. I did not want to be there. This is where the suicide ideation started. I was not good enough for my family, why should I even go on living?
I kept on going through middle school until I had a huge meltdown at a meeting and I wasn’t allowed back. My mother was furious but I was happy.
Soon after I got kicked out of Weight Watchers, we went on a vacation. My brothers and I went down to the pool. My toxic brother would say as soon as I got into the pool,”Here come the shock waves, we are all going to die.” I ran up crying and my parents believed him over me.
My parents never took me to the doctor to see if there was a medical reason, blood work wasn’t taken for hormones. Everyone knows that hormones control everything. A simple blood test and ultrasound would have told them that I was insulin resistant and I have PCOS and treatment could have started way earlier. Instead they took the opportunity to abuse me.

What did this do to me?

I hate eating in front of other people, does not matter who it is. When out with my husband, I am constantly looking to see who is watching me. Logically I know people who don’t know me don’t care but I always have this nagging feeling that people are constantly judging me.
I have thoughts of me not deserving food. I am constantly having a nagging feeling telling me that I have enough in fat stores and I do not need food. I know that not eating is not good for metabolism but I am not thinking I do skip means from time to time. Don’t do that. That was due to the trauma.
Yes I have had therapy bit but never talked about this because I am never comfortable about talking out my weight. There is still suicide ideation and constantly asking people if they still love me. All the different comments my mother made to me caused this.
Now that I have people who support me, I am able to get my PCOS treated and I am losing some weight with the help of an endocrinologist. Together we figure out what my hormone levels are and what needs to be done. She tried me on metformin but it makes me so ill, I cannot get out of bed. There is a supplement that is backed by science she has me take nightly and my insulin blood levels have been going down. If you have PCOS, work with an endocrinologist who is familiar with the condition.

How You Can Prevent Trauma

When your children are fat shammed, it can carry into adult hood. Do not do this to your children. If you are concerned, bring them to see the doctor and see if there is a medical reason why. Sometimes its a genetic condition, sometimes its an endocrine (like me) condition. It could be something completely different. Teaching your children to eat a balanced diet does not have to include abuse like this.
Do not make comments about your child’s weight. They will always remember this for the rest of their life. Do you want to be the parent who bullies or supports your child. If you pick the first one, be prepared for the possibility of your child cutting you off after they are an adult and wanting nothing to do with you.