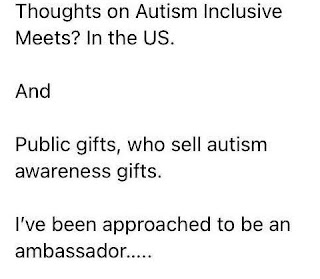 It is no secret that most autism awareness gear that is out there is geared towards “autism parents.” They aim to represent us and not with us just to make a dollar. This is something the majority of us have bene adamantly against. This one company went a step further and faked a partnership between Autistic Inclusive Meets USA and themselves.

We have never heard of this company, or even spoke to them. We haven’t voted on this partnership. We would not want our reputation ruined by being associated with this website. They use the term awareness and use primary colors which is used to infantilize autistics. They even co opt our infinity symbol.

A few members of the board of AIM USA are administrators of a large Facebook Group called Autism Inclusivity. This group educates parents so they don’t become victim of quackery or the tragedy narrative. Its quackery prevention for all intents and purposes.

How We Came to Know About This

One member messaged us about the company and how they can make sure it goes to AIM USA. They claimed to be a partner with us. I am the Executive Director of AIM USA and have never heard of them. We never voted on a partnership or have seen ANY donations that they claim to send us. Apparently they approached this member to be a brand ambassador. 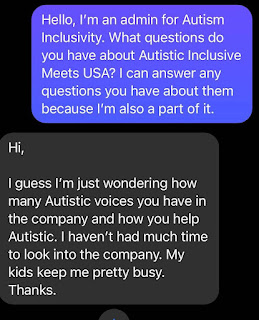 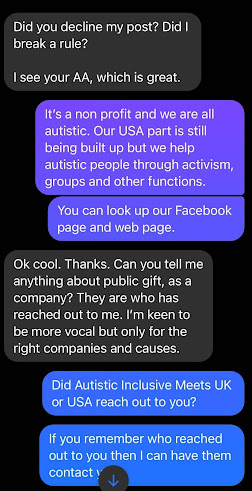 This got brought back to the admin chat and one of the other admin who is also a board member started a conversation with the Public Gift Instagram account and we found out their name was Sarah Sampson.

Upon Further Inspection, We Found They Feature a BCBA

When we were going off the idea that they were the same person, she sent this message which really made me angry. She claimed that she was an “innocent bystander.” Granted in this situation she didn’t use our image or name BUT she is a doctor in ABA and that is far from innocent. She claimed she didn’t know the very community that she claims to serve. Imagine having a Doctorate in child abuse.
When she asked me to remove the post, I refused. I had been shut up by BCBAs in the past and they won’t do it now. Her photo was publicly displayed and it shall stay. 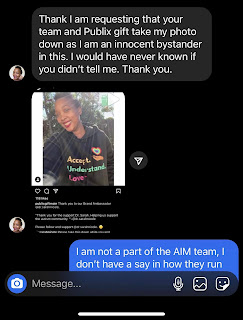 I found out from an ex BCBA that the BCBA community cringes at the words Actually Autistic. That should tell you something.

These companies could spread acceptance of our existence but they continue to cater to the martyr parent crowd. If they ask us about what we thought of our own existence, maybe we could work together. These are the same types of people who have a problem with us making our own shirts and selling it on Tee Public, Red Bubble and the likes.