In 1996, Jim Humble, a former scientologist,  claimed to discover MMS while mining for gold in the jungles of South America. He claimed that it cured malaria (this is not true). After some time, he invited a missionary group to Africa where he experiments with MMs on the locals there. Hex poisoned over 5,000 people there.

He also claims he is a G-d from the Andromeda galaxy. “And then I asked to be put in the part of the space navy that watched over the Earth,” Humble said.

In 2010 Jim Humble and Mark Grenon founded the Genesis II Church of Health and Healing. The both of them are self styled Archbishops of their made up church. They did this so they could distribute MMS more easily. They needed to found a church because the mainstream medical community relies on fact and not anecdotal evidence. He lists MMS as a religious sacrament so it is harder to prosecute. He even said that it has nothing to do with religion. He co-founded the Genesis 2 church to “legalize the use of MMS” and avoid getting caught.

Their main idea is that chlorine dioxide can kill pathogens in the body that causes illnesses. They say it should be ingested every day to maintain health.

They set up shop in Bradenton, Florida out of their home. It is not an actual church. They say that Genesis 2 is a non religious church that was founded to create a legal structure to protect Jim Humble’s teachings. They do not claim to serve G-d. They serve humankind. They do reference Bible quotes throughout the website (not active anymore)

They chose the name Genesis 2 to reference a new beginning. This is related to their goal of restoring health and removing humans from the current “world of death” to the “world of living.”Thier members and website suggest to help people, they must spread the “knowledge” of MMS. They maintain the belief that “big pharma” has a coverup happening related to MMS. They claim that MMS is safe for everyone.

The members carry around a card that says:

“This card signifies that this member of the Genesis II Church of Health and Healing has the God-given, unalienable right to control and maintain their personal health. All members are exempt from any means not chosen, including but not limited to: vaccinations, medications, X-rays, scans, implants, mandatory voting, and health insurance mandated by a human government or authority.”

Several times a year, G2 held seminars on how to use MMS and a group of people would be certified in bleach in just a short weekend. They also had weekly 1 hour podcasts complaining about how everyone is out the get them. Mark Grenon claims to have been a Boy Scout. Scouts does not teach what he does.

In 2009 an American woman had taken MMS to prevent malaria on a cruise. The authorities found that the cause of death was undetermined so this fueled G2 to claim no one ever died from MMS. She died hours after taking this dangerous substance.
https://www.nbcnews.com/tech/internet/moms-go-undercover-fight-fake-autism-cures-private-facebook-groups-n1007871
In 2019, NBC ran an article about mothers in the United States and the UK. fighting MMS being used on autistic children and vulnerable adults. It features G2 and their role in the poisoning of children. This article was the 2nd most read online article by NBC in 2019. This article raised a lot of awareness around this issue. It even warranted a Dr. Oz appearance:
The FDA issued a warning in August of 2019, but did not take any other action. This only effected disabled kids after all.

The the global pandemic happened. Since G2 says MMS is the miracle cure for everything, they simply could not help themselves! They claimed that MMS cured and prevented COVID 19. This caught the FDA’s attention. When it affected able bodied adults, they suddenly cared.
The FDA sent G2 a warning letter:
https://www.fda.gov/inspections-compliance-enforcement-and-criminal-investigations/warning-letters/genesis-2-church-606459-04082020
After ignored temporary injunctions and court appearances, the FDA raided the Grenon’s residence. There were Federal charges filed against Mark Grenon and his 3 adult sons. After a search warrant was executed, they recovered:
50 gallons of muriatic acid
22 gallons of miracle mineral solution
8,300 pounds of sodium chlorite.
Two of the Grenon sons were arrested and the other two were hiding in El Rodadero, Magdalena, Columbia.

Mark Grenon’s Reaction after the raid:

Not long after this, Grenon and his other son were arrested in Columbia. All the people involved are currently in jail under marshall hold. They are currently still awaiting a court date in jail. I plan on being at court since I only live 2 hours away from the court house!

Yesterday, April 23, 2021 Mark, Jonathon, Jordan and Joseph Grenon were indicted in the south district of Florida Federal court. It was for marketing and selling a fake cure for COVID 19. They did not act on it when autistic kids were being poisoned but hey, its something.
“According to the indictment, the Grenons, all of Bradenton, Florida, manufactured, promoted, and sold a product they named Miracle Mineral Solution (“MMS”).  MMS is a chemical solution containing sodium chlorite and water which, when ingested orally, became chlorine dioxide, a powerful bleach typically used for industrial water treatment or bleaching textiles, pulp, and paper. The Grenons claimed that ingesting MMS could treat, prevent, and cure COVID-19, according to the charges.  The FDA, however, had not approved MMS for treatment of COVID-19, or for any other use.  Rather, in prior official warning statements, the FDA had strongly urged consumers not to purchase or use MMS for any reason, explaining that drinking MMS was the same as drinking bleach and could cause dangerous side effects, including severe vomiting, diarrhea, and life-threatening low blood pressure. See https://www.fda.gov/consumers/consumer-updates/danger-dont-drink-miracle-mineral-solution-or-similar-products.  In fact, FDA received reports of people requiring hospitalizations, developing life-threatening conditions, and even dying after drinking MMS.”
“The indictment further alleges that before marketing MMS as a cure for COVID-19, the Grenons marketed MMS as a miracle cure-all for dozens of other serious diseases and disorders, even though the FDA had not approved MMS for any use. The Grenons sold tens of thousands of bottles of MMS nationwide, including to consumers throughout South Florida, according to the allegations. They sold this dangerous product under the guise of Genesis II Church of Health and Healing (“Genesis”), an entity they are accused of creating to avoid government regulation of MMS and shield themselves from prosecution. According to charging documents, Genesis’ own websites describe Genesis as a “non-religious church,” and Defendant Mark Grenon, the co-founder of Genesis, has repeatedly acknowledged that Genesis “has nothing to do with religion,” and that he founded Genesis to “legalize the use of MMS” and avoid “going [ ] to jail.”  The Genesis websites further stated that MMS could be acquired only through a “donation” to Genesis, but the donation amounts for MMS orders were set at specific dollar amounts, and were mandatory, such that the donation amounts were effectively just sales prices.  The indictment alleges that the Grenons received more than $1 million from selling MMS.”
They are also being charged with criminal contempt.
So not only are they being brought up on civil charges, they are being brought up on criminal charges.
Monday, April 26 2021 is arraignment in Miami and I plan on being there. I will update more then.

On this day I drove down to Miami to exercise my rights under the Sunshine Law. I wanted to watch it with my own eyes and wanted him to see my face.  Nothing more, nothing less.
ANYWAY.
I was not allowed in due to COVID restrictions, which was fine. I didn’t fight it.
I was later informed that at the arraignment, each defendant was handed a copy of the indictment and they entered a plea of not guilty. Bail was not discussed because they are on marshall hold and ineligible for bail.
Will update when a discovery date is set. 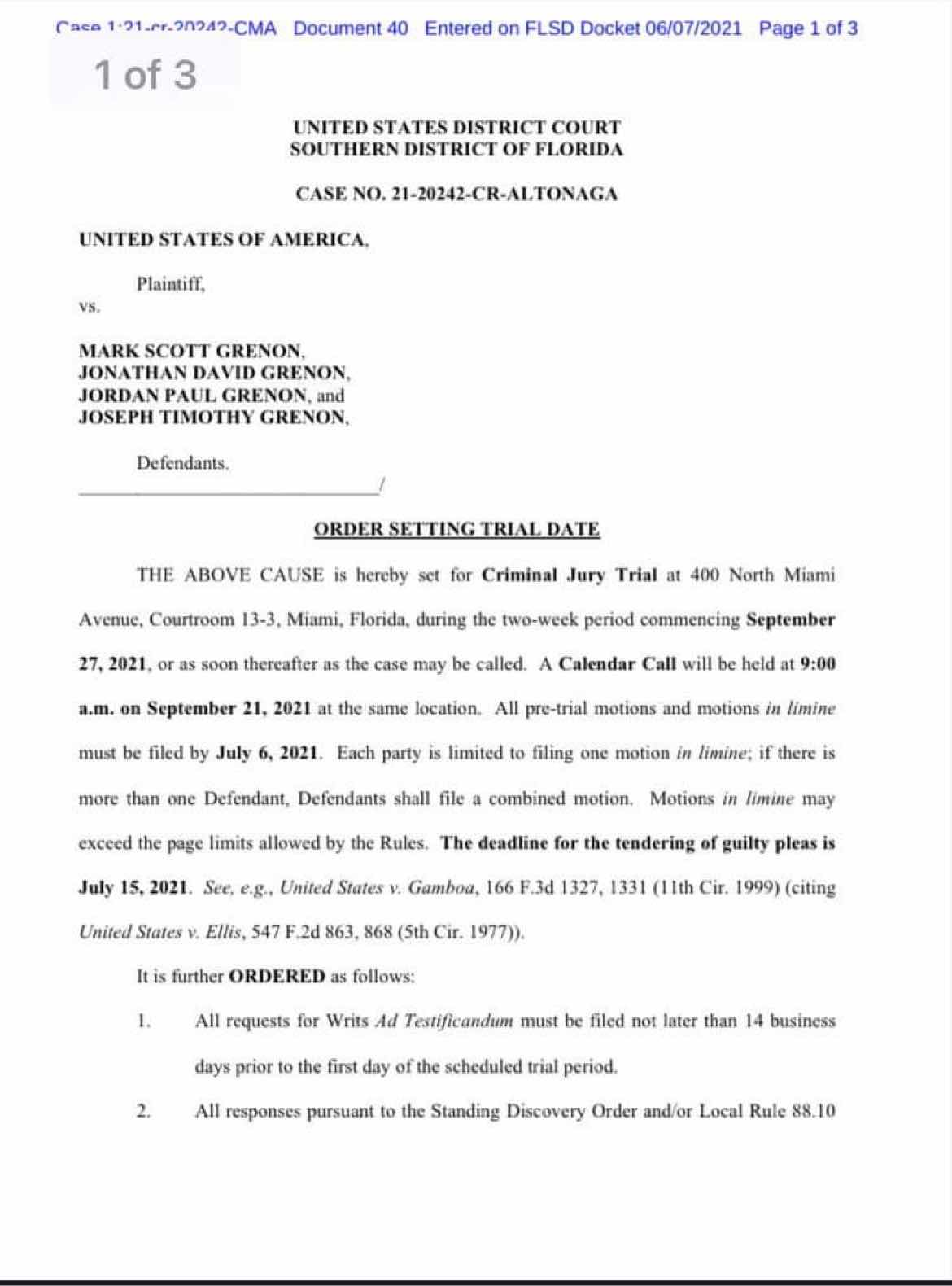 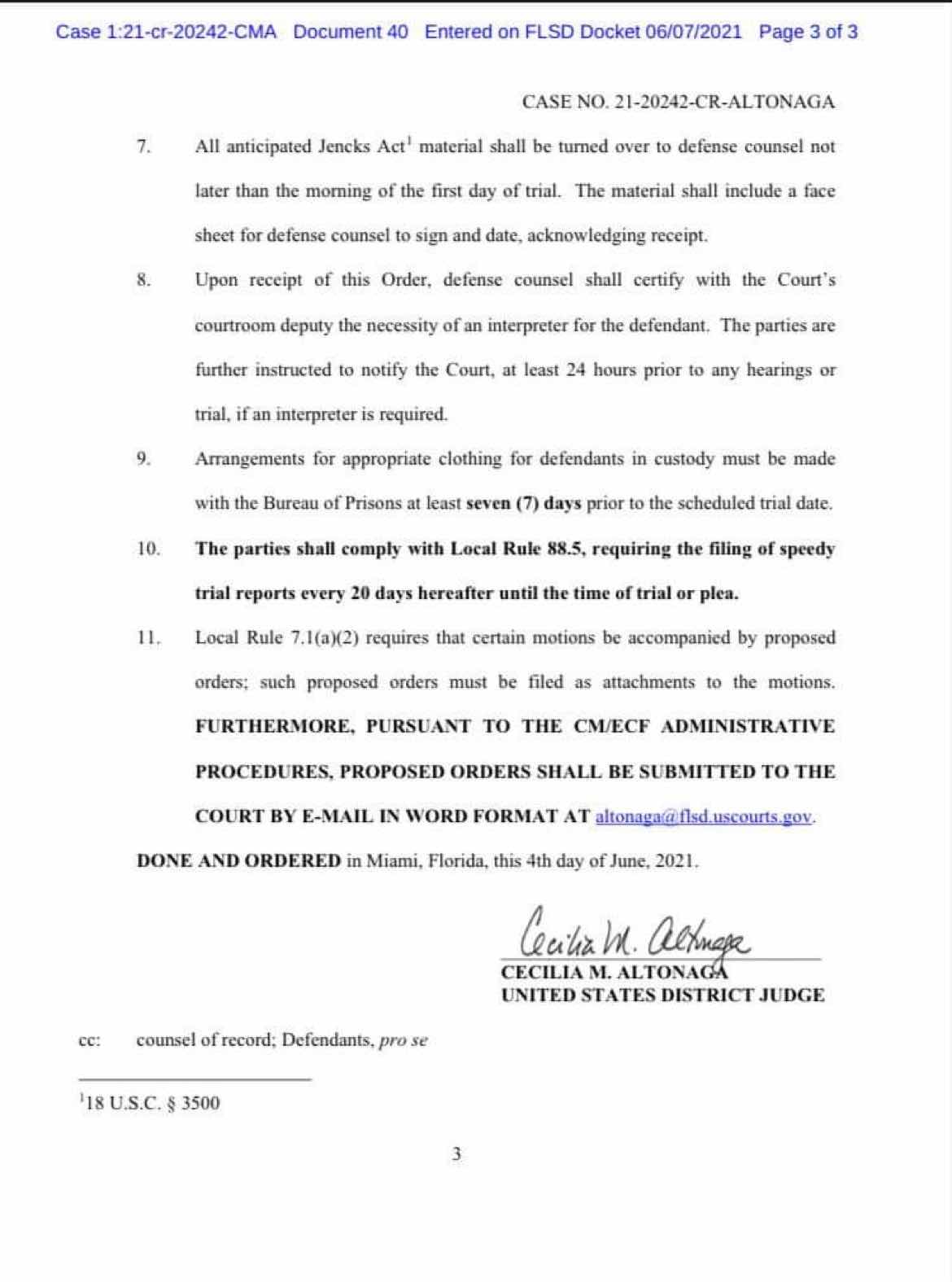 Extradition from Columbia Has Been Approved!

Joseph Grenon was in Federal court in Miami on 12/29/2021 after being extradited from Columbia. He did arrive in the United States after hiding in Columbia and being in Columbian prison.
According to his indictment, which was filed in April 2021, MMS was being manufactured, marketed and sold by the Grenons as the Genesis 2 Church of Health and Healing. The indictment says that the Grenon family was creating a non religious church in an attempt to evade government regulation of MMS and shield themselves from prosecution, which they have admitted on the internet numerous times.
This hearing was a arraignment as he was arraigned before without him present. Bail for Joseph Grenon was decided. Bail was denied due to being a flight risk. Let’s be honest, he is the definition of a flight risk right now.
The charges were:
He waived his right to counsel, as the the rest of the family has done this. The hearing was 1 hour and 19 minutes. 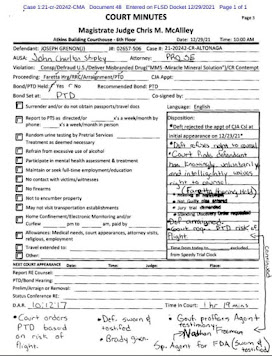 3 thoughts on “Quack exposed: Genesis 2 Church of Health and Healing”